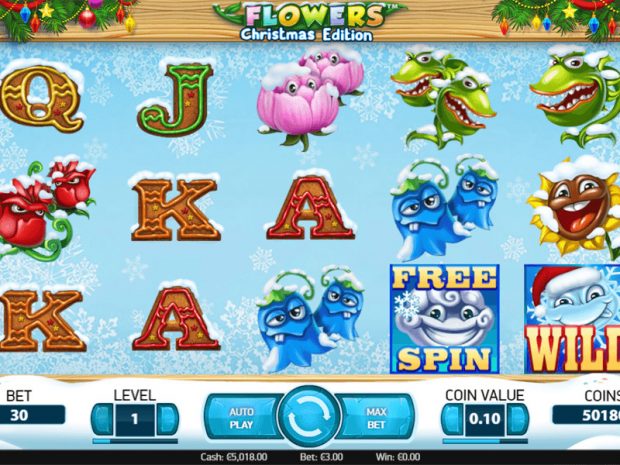 Carlena Corlett. Reviewed on 01.07.18
What is the quickest way to come up with a new game? Yes, add some snow to all the symbols and scenarios and name it 'Christmas Edition'! That's exactly what NetEnt did with the original Flowers game. They change the season into winter, added snow everywhere, and voila, a new game is born, Flowers Christmas Edition. What the 'f'! I would have expected at least a few upgrades or some minor changes to the original version of the game, but no, NetEnt decided adding some snow was sufficient to label it as a new game. What the heck, I can certainly do better than what NetEnt had done. Change the seasons, add the corresponding weather scenarios, and voila, 3 new games all at once - Summer, Autumn and Winter Editions! To be really critical and cynical, I might even add a 'Drought Edition', hahaha.

Like I said, what you see and what you get in the original version, is what you get in the Christmas version too, plus bits of snow everywhere. And to make it realistic to the seasonal change, the Wilds now become Santa Wilds. Oh gees! Do flowers bloom in winter when there are snow? No. Do flowers even exists in winter? No. Can flowers smile in the blardy shivering cold? No. There you go! So much for realistic seasonal changes for the game! For brilliance in creating good games, NetEnt can be down right silly too!

My plays on Flowers were never that good. My plays on this Christmas Edition were never any good either. For one reason or another, I just couldn't get any good decent wins on the blardy game! Maybe just my no-luck, maybe just my bad luck, but whatever it is, the game to me is simply 'what the *uck'!
What I didn't like in Flowers has automatically been duplicated in this edition too. The non-expanding, non-moving Wilds, stacked only in the free spins game and not in the base game, and the overall low win values for all the symbols, except for the reasonable 5000x line bet amount for 5 Wilds. 10 free spins with a 2x multiplier is nothing to shout about, when the norm is usually 15 or 20 free spins with a 2x multiplier. Needing 4 scatters to activate the free spins game is yet another thing I don't quite like, because I keep getting only 2 or 3 scatters most of the time. Needing 10 of any symbol to get its maximum win value is doubly harder to get. Not only that, get 10 of the top symbol, the red rose, and you win only 2000x your line bet. What the 'f'. If 5 is the usual number to win 2000x, then 10 should double the win to 4000x at the very least! Do you think it is easy to get 10 red roses? Definitely not! Can you understand why I don't like this game? Yes. Clever you! Hehehe.
Barbar. Reviewed on 26.09.18
Today when I opened to spin the Flowers in demo mode, I didn’t like it design like last year when NetEnt launched one of its releases.

I definitely liked this game and I wanted to play it and spin it way more then my bankroll allowed me last year but I cant remember any descent wins of mine and what else I could do but enjoy beautiful screenshots posted in the forum .

We had many of these and I remember it was so much fun and I was always said if slot doesn’t like me…well, no way that any slot could like someone…it was about my bad luck, limited bankroll and so on.

In my personal opinion NetEnt failed with their Christmas edition.

I've never thought about that but truth is they never paid attention nor created holiday slots and I don’t even have a clue, why is that..

Maybe its business secret, who will know, but what I know is, if you make special Christmas edition, there should be something special and something new.

I am unsure they added any special feature, or at least special award if this slot meant to be special gift to the gamblers.

Paytable looks the same like in standard Flowers slot and I noticed, my eyes actually hurt because of the extra decorations attached to the every single symbol in this slot.

Even the background sound is the same like in just… Flowers !

I am curious to find out more about NetEnt, its been a year now.

Considering the fact I have someone in Sweden who knows, I might get some answers and share with our community but to know business secrets isn’t possible…if there is a secret behind all this.

I would strongly recommend you to play just…Flowers and have fun!
Edwin. Reviewed on 28.09.18
Flowers Christmas Edition is one of the newest video slots which came from NetEnt software provider. This game is identical to first edition of Flowers and only difference between them if design.

Talking about design I like Christmas edition version more. It offer better feeling while I was playing it with all those snow effect on the symbols.

I received many offer for free spins on this game and sure I used them. The results were sometimes good, sometimes bad. But I played it even with my own money and I had some nice good winnings.

At flowers video slot I really like free spins feature. It offer stacked wild symbols which could bring you big money. I had once a win which was over x100 total bet and I also post it here, at AskGamblers forum.

Otherwise I think it is a great game. It has big potential on winnings and I like to play this kind of games. I think all likes this kind of video slots. Who would like video slot which only take your money, right?

I will rate Flower Christmas edition game with 9 stars. I will took it one star because NetEnt could designed even better version. Not only in design. I think they could add different, even better feature during free spins. I would like to see better multipliers and things like that. Otherwise it is a great game and I think I will play it more often now when it is winter. And later when will be spring or summer I think I will play again the fist version of this game. I would recommended Flowers Christmas Edition video slot to all who has not try it out yet. It is very nice game and I enjoy every time when I play it.